According to the U.S. Centers for Disease Control, influenza activity remains high and widespread across the U.S.  While the rate of influenza like illnesses appears to be declining, indicators that reflect severity are now rising for the week ending January 12, 2012 (week 2).  Nationwide, influenza A H3N2 is the most commonly detected influenza subtype.

The CDC says that the proportion of deaths attributed to pneumonia and influenza (P&I) based on the 122 Cities Mortality Reporting System increased sharply; remaining above the epidemic threshold for the second consecutive week.

8.3% of all deaths reported through the 122 Cities Mortality Reporting System were due to pneumonia and influenza in week 2.  This percentage was sharply above what the CDC considers the epidemic threshold of 7.3% for that time of year. 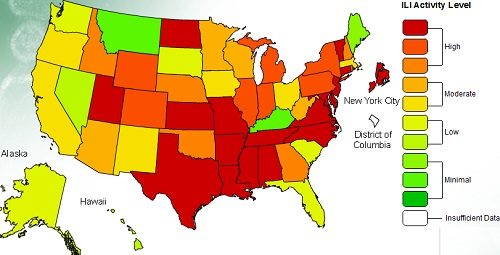 There was 11 flu outbreaks in Florida for week two which occurred in Hillsborough, Miami-Dade, Monroe
and Orange counties. 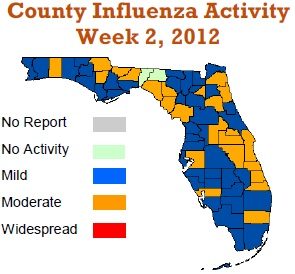 No Activity: Jefferson and Madison Counties