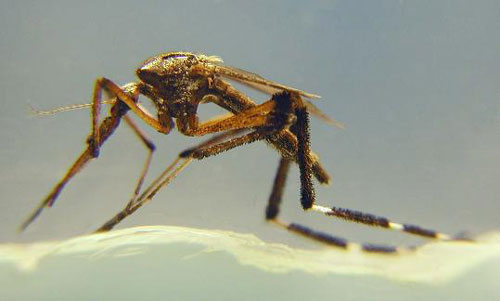 GAINESVILLE, Fla. — If mosquitoes were motorcycles, the species known as Psorophora ciliata would be a Harley-Davidson — big, bold, American-made and likely to be abundant in Florida this summer.

Just how abundant is a matter of speculation, but University of Florida entomologist Phil Kaufman says last year the state had a bumper crop of the huge, biting insects, which are sometimes called gallinippers. He said there may be a repeat on the way.

“I wouldn’t be surprised, given the numbers we saw last year,” said Kaufman, an associate professor with UF’s Institute of Food and Agricultural Sciences. “When we hit the rainy cycle we may see that again.”

The gallinipper is a floodwater mosquito, with females laying eggs in soil at the edges of ponds, streams and other water bodies that overflow when heavy rains come. The eggs can remain dry and dormant for years, until high waters cause them to hatch, Kaufman said.

Last June, Tropical Storm Debbie caused flooding in many parts of Florida and unleashed large numbers of gallinippers, along with other floodwater mosquitoes.

Native to the entire eastern half of North America, the insect has a body about half an inch long, with a black-and-white color pattern that makes it resemble a super-sized version of the invasive Asian tiger mosquito.

As with other biting mosquitoes, only the female gallinippers are blood feeders; males survive on flower nectar. The species is notoriously aggressive and has a painful bite.

“The bite really hurts, I can attest to that,” Kaufman said.

With that trait in mind, observers have suggested the gallinipper might be a good candidate for biological control efforts, using the larvae to reduce populations of other pest mosquitoes. But that strategy has a fatal flaw, Ragasa says – it results in more gallinippers.

“That kind of defeats the purpose of using them for biocontrol,” he said.

Gallinippers can be warded off with repellents containing DEET, though Kaufman said that due to their large size they may be more tolerant of the compound than smaller biting mosquitoes. Other precautions include wearing long pants and long-sleeved shirts when venturing into wooded areas, especially places where standing water collects after rain storms.

There are a few good things one can say about this mosquito: It isn’t considered a significant vector of mosquito-borne illness affecting people or animals. And human activity doesn’t seem to boost its populations.

“This isn’t one where you build a subdivision and start to see more,” Kaufman said.