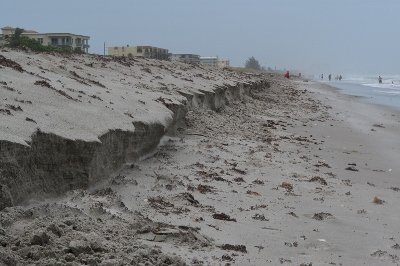 BREVARD COUNTY, Fla. – The U.S. Army Corps of Engineers has approved Project Implementation Reports that will result in renourishment of North and South Reach beaches in Brevard County, with the federal government footing virtually 100 percent of the estimated $29.3 million cost to restore parts of the county’s eroded shoreline.

The North Reach, including Cocoa Beach and Cape Canaveral, will receive about 1 million cubic yards of sand with an estimated cost of $16.8 million.  Funding for the North Reach will come from both the Flood Control and Coastal Emergencies (FCCE) Hurricane Sandy response fund and normal operation and maintenance funds.

The South Reach, which covers  3.8 miles of shoreline in Indialantic and Melbourne Beach, will be renourished with 585,000 cubic yards of sand. South Reach funding of $12.5 million will come entirely from the FCCE account to restore Hurricane Sandy damage.

The Army Corps has not released an intended construction schedule, but work on both projects is expected to take place between November 2013 and May 1, 2014.

Brevard County is also working to secure state beach restoration funds to repair other county beaches where an Army Corps project has never been constructed, including the Mid Reach and South Beaches areas.