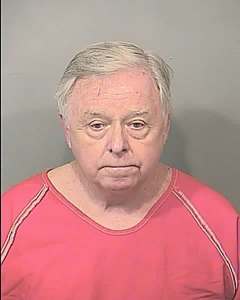 MELBOURNE, Florida --  The Chief Scientist for Headquarters Air Force Technical Applications Center at Patrick Air Force Base was arrested on charges relating to the possession of child pornography following a cooperative investigation between agents from the Brevard County Sheriff’s Office and the Federal Bureau of Investigation.

Seventy-one-year-old David O’Brien was taken into custody at his home located at 4095 Turtlemound Road in Melbourne, Florida and charged with 10 counts of Possession of Child Pornography.  He is being held at the Brevard County Jail on $250,000.00 bond.

The Sheriff’s Office SORT Unit received information that O'Brien was involved in the distribution of child pornography.  The investigation into this information led to the issuance of a search warrant for O'Brien’s residence.  Upon serving the search warrant, agents recovered several computers from the residence.   At the present time, investigators say they have uncovered no information that O’brien committed any crimes while on U.S. Air Force property.

"Our agents in coordination with the FBI and PAFB are to be commended for a very thorough and timely investigation." Sheriff Wayne Ivey said in a statement. "Through their outstanding efforts, an individual who actively participated in the exploitation of our children has been removed from our communities. I applaud this partnership and the agencies involved who stand between our most defenseless citizens and those who wish to harm them.  Today's arrest sends a strong message, that regardless of who you are, these Agents will investigate you and put you in our jail if you take any action to harm a child!"