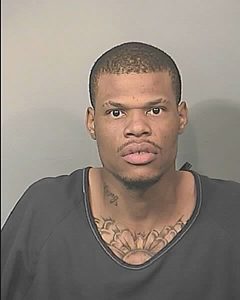 MELBOURNE, Florida -- What began as an odor of marijuana in an apartment complex parking lot ended with officers recovering a gun, meth-amphetamines, and taking a suspect into custody.

Melbourne Police officers were conducting a foot patrol at the Shull Manor apartment complex at 3:00 a.m. on Saturday when they smelled the odor of burnt marijuana in the area.  As the officers walked through the parking lot to investigate, they observed 24-year-old Clifford Long in the area of the strong odor.

Upon seeing the officers, Long allegedly ran from them in the opposite direction and a foot pursuit ensued. As officers gave chase, they continuously ordered Long to stop running.  Long continued to run from them and was then observed reaching into the waistband of his pants. Police say it was at this moment that Long produced a handgun from underneath his shirt.  Long then began to turn toward the pursuing officers, firearm in hand, but tripped over a curb and fell to the ground.  Long dropped the firearm when he fell and he was taken into custody.

Upon being searched, arresting officers say they located marijuana, a baggie containing cocaine residue and approximately one gram of methamphetamine in Long’s possession.  The firearm, a loaded .45 caliber handgun, was also retrieved.  Long was booked at the Melbourne Police Department and transported to the Brevard County Jail in Sharpes.