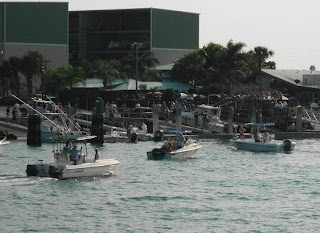 
The Port Authority announced yesterday an increase in the number of alternative locations for replacement boat ramps from four to six.  The Port Authority emphasized that all of the proposed locations would be east of the Port Canaveral locks, which was a major concern for boaters.


The Port Authority will hold two public meetings on Thursday, August 15, 2013, at 9 a.m. and 5:30 p.m. in the Commission Chambers of the Canaveral Port Authority Maritime Center located at 445 Challenger Road in Port Canaveral, Florida to receive community feedback as to where replacement ramps should be located in the Port.


The Port Authority contends that "Cruise/cargo growth for the economic benefit of Brevard and Central Florida depends on strategic use of the Port’s deep water" and that the "new $75 million cruise terminal, which could mean 2,000 direct and indirect jobs, as well as boost the local economy up to $250 million annually."


But the local economic benefit argument laid out by the Port Authority has not been well received by Brevard Times readers who commented online, possibly due to actions in recent years that seem anti-local such as requiring a fee from shuttle buses for dropping off cruise passengers from local hotels, granting exclusive rights to a single taxicab company, and the infamous video produced by the Port Authority which depicted local off-site parking lots as unreliable and prone to crime.


"These ships in my opinion are pretty useless to the local economy as most of the workers are not from this country," wrote one reader in his comments.


"Relocating the existing boat ramps at Freddie Patrick Park completely changes the dynamic of the boating community and its interaction with the Cove area," Joe Penovich, owner of Grills Seafood and Sunrise Marina, wrote in a letter to Port Commissioners.  "So many of our local residents use these centrally located ramps for a day of fishing, then meet up with non-fishing family and friends at the ramps to dine in the cove.In addition to this daily use, offshore fishing tournaments and racing events are a key component of the Cove dynamic. Millikens, Rustys, Fishlips and Grills all sponsor and host a fishing tournament or multiple tournaments throughout the summer."

Adding to the controversy is a proposal to charge boat owners a fee for using the new boat ramps while the cruise lines are benefiting from taxpayer money to improve the Port's infrastructure.  This comes at a time when the cruise industry, which often flies foreign flags and hires foreign workers to avoid paying U.S. taxes, is under fire from U.S. Senator Jay Rockeffeller (D-WV) who filed legislation earlier this month to place an excise tax on cruise revenue.


“The cruise industry can’t operate for free here in the US.  It costs money to send the Coast Guard to tow their drifting ships and it costs money to maintain the ports they use.  Cruise lines need to start paying their fair share of taxes and stop expecting everyone else to foot the bill,” said Rockefeller.


Port Authority CEO John Walsh said in his State of the Port speech the Port received $24.5 million in Florida state taxpayer money to widen the channel to accommodate mega cruise ships, another $6 million in Florida Department of Transortation funds to build the new terminal, and $18 million from Homeland Security and various other government grants.  The Port could also receive millions more from U.S. taxpayers if the Water Resources Development Act passed in the U.S. Senate becomes law.


"The United States Coast Guard keeps the seas safe for Carnival’s cruise ships. Customs officers make it possible for Carnival cruises to travel to other countries.  State and local governments have built roads and bridges leading up to the ports where Carnival’s ships dock," writes Florida maritime attorney Jim Walker who details at length in his blog the government benefits the cruise industry receives and the taxes that they pay.  "Over the last five years, the company has paid total corporate taxes — federal, state, local and foreign — equal to only 1.1 percent of its cumulative $11.3 billion in profits."   Walker also cites an instance where the creator of Carnival denounced his U.S. citizenship and returned to Israel "with his billions in a ploy to avoid estate and inheritance taxes."