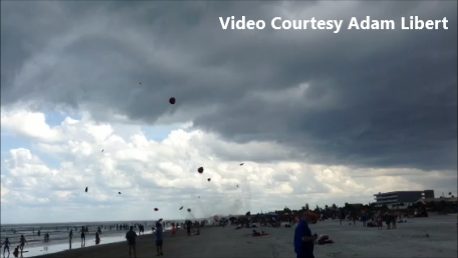 COCOA BEACH, Florida -- Around 3:30 p.m. on Sunday, a "Gustnado" touched down on the beach at the end of Minuteman Causeway in Cocoa Beach, Florida.


The National Weather Service in Melbourne determined that the weather event was a "Gustnado" that is an official meteorological term for "a small whirlwind which is not a tornado."


According to NWS, a gustnado is a small, whirlwind which forms as an eddy in thunderstorm outflows. They do not connect with any cloud-base rotation and are not tornadoes. Since their origin is associated with cumuliform clouds, gustnadoes will be classified as Thunderstorm / Wind events. Like dust devils, some stronger gustnadoes can cause damage.

Witnesses said that the winds reached 60 to 70 miles an hour and sent tents, beach umbrellas, and children's inflatable water toys flying into the air.


Lifeguard Pulls Shark Back Into Water Off Cocoa Beach