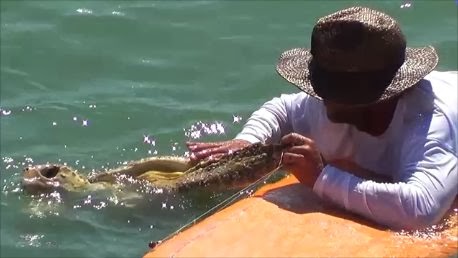 COCOA BEACH, Florida -- A surfer came to the rescue of a loggerhead sea turtle that was tangled in fishing lines just south of the Cocoa Beach Pier this afternoon.

The turtle's flippers were so entangled that it could be seen gasping for air from the ocean's surface as it struggled to free itself from the mono-filament.

Seeing the marine reptile in distress, a nearby surfer paddled over to help the sea turtle while risking a possible bite from the animal.  Loggerhead sea turtles have a bite force so powerful that they can easily tear through a conch shell - a mainstay of the turtle's diet.

After a few minutes, the surfer had completely untangled the sea turtle and it swam away.  Having done his good deed for the day, the surfer then just casually caught the next incoming wave.

Loggerhead sea turtles are listed as an endangered species under the Endangered Species Act.


Editor's Note:  There have been some comments made regarding the surfer dropping the line back into the ocean.  While it may not show up well on the YouTube version,  the higher-definition version of this video clearly shows that there is downward tension on fishing line, away from the turtle, indicating that the line is tethered to the sea floor.


The thickness of the line appears to be somewhere between 20 lb. and 40 lb. test, which is not easily broken by bare, wet hands.