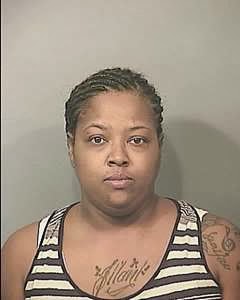 MELBOURNE, Florida -- Melbourne police say that a woman who dragged a Melbourne Police officer with her car has been arrested.

On Tuesday night, members of the Brevard County GAME OVER Task Force arrested 34-year-old Tosha Wilson in Palm Bay, Florida.  Wilson was wanted for a September 18th incident where she allegedly dragged Officer Joe Yorkey with a vehicle.

Officer Yorkey was investigating a retail theft complaint at the Bealls Outlet on Babcock Street in Melbourne when Wilson allegedly drove from the scene, dragging him through the parking lot, and causing Officer Yorkey to sustain minor injuries.  Police say that Wilson was in the company of another female when the alleged battery on a law enforcement incident occurred.  Melbourne Detectives still want to question that witness.

The Melbourne Police Department credited the GAME OVER Task Force for their assistance in the apprehension of Wilson. The department would also like to thank the members of the community who expressed concern for Officer Yorkey and offered their well wishes.