Is The Florida Manatee Population Comeback To Blame For Record Deaths? 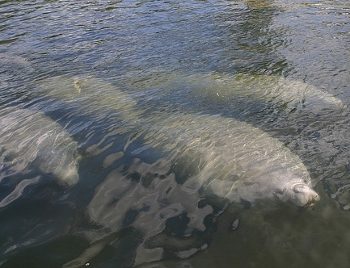 CAPE CANAVERAL, Florida -- In Florida, 769 manatees have died so far this year from January 1st through October 29th, making it the largest annual manatee die-off in Florida since record-keeping began, according to a press release issued by the Save the Manatee Club.

The previous record was set in 2010 when biologists with the Florida Fish and Wildlife Conservation Commission documented 766 dead manatees, of which hundreds died from cold stress. With more than two months still to go in 2013, nearly twice the number of manatees have already died than died in all of 2012.

According to Dr. Katie Tripp, Save the Manatee Club's Director of Science and Conservation, two unusual mortality events in 2013, coupled with the regular threats manatees face on a daily basis, have been responsible for the unprecedented losses. A record number of 276 manatees succumbed from exposure to a toxic red tide bloom in southwest Florida, centered in Lee County. Meanwhile, on Florida's east coast, an unusual mortality event claimed more than 100 manatee lives in Brevard County this year.

"This year's record-breaking manatee mortality is a loud and clear signal that our waterways are in trouble," says Tripp, who explained that of the total number of manatee deaths so far this year, 123 were stillborn, newborn, or young calves less than five feet in length, which sets another annual record for this category of mortality.  Of these, at least 49 were found in Brevard County, at the epicenter of the unusual mortality event linked to a variety of algal blooms and loss of 47,000 acres of seagrass since 2010.

While biologists have not come up with a definitive answer for the manatee die off and the destruction of the Indian River Lagoon, it could be the Florida manatees' population comeback and the overgrazing of sea grass that is causing their habitat's demise on Florida's East Coast.  According to a research study performed by the University of Florida and the U.S. Geological Survey in 2012,  the manatee population has grown so much in the last decade that the aquatic creatures may soon find themselves reclassified by wildlife management officials from endangered to merely threatened.

An 800 to 1,200 pound adult sea cow can eat up 10% to 15% of its body weight daily in aquatic vegetation.  According to a U.S. Fish and Wildlife Manatee Recovery Plan, manatees sometime graze on sea grass which leaves the possibility for regrowth - but manatees also "root" sea grass - meaning the entire plant is pulled and the underwater sediment is disturbed.

Of course, what goes in must also come out.  Residents in Vero Beach witnessed the full extent of the sea cows' voracious appetites' end product in 2009 when a mile-long stretch of manatee fecal matter closed area beaches.

“I’ve never seen anything like it, and I’ve lived along beaches all my life,” beach-goer Bill Becker told TCPalm. “It was disgusting, but mystifying. It looked like Great Dane poop all along the beach.”


Although scientist have not yet linked the nitrates in manatee fecal matter to algae growth in the Indian River Lagoon, the worst algae blooms in Brevard have erupted in recent years in the northern part of the Indian River where manatees congregate in large numbers near an FPL power plant that discharges warm water just south of Titusville, Florida.