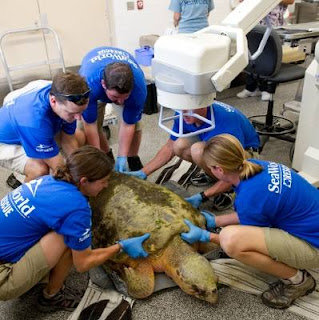 MELBOURNE, Florida -- The rescue of a sub-adult loggerhead sea turtle last year by Melbourne Police and Brevard County Sheriff’s Deputies will air this weekend on the ABC season premiere episode of Sea Rescue with Sam Champion.

Sea Rescue tells the stories of marine animal rescue, rehabilitation and release by the SeaWorld rescue team and its partners.  The popular show has been seen by more than 86 million viewers in its first two seasons.

During the rescue, the Brevard County Sheriff’s Aviation Unit responded to a call of a possible body in the Indian River Lagoon.  The Aviation Unit determined it was not a swimmer that needed help - but a large sea turtle.  The Melbourne Police Marine Unit was then called upon to help aid the turtle.

Law enforcement contacted the Sea Turtle Preservation Society about the turtle and the Society informed the officers that the turtle needed medical attention because it could die if it was not rescued.  The three officers then pulled the 160 pound loggerhead turtle up onto the boat and brought it to shore.

The turtle was transported to SeaWorld Orlando’s Animal Rescue for care and rehabilitation.  The turtle, nicknamed “Lazarus: The Presumed Dead Loggerhead”, was released into the Atlantic Ocean at Lori Wilson Park in Cocoa Beach, Florida last February.  The officers who initially found Lazarus took part in the return of Lazarus to his aquatic home.

Just this week, another sea turtle rescue made by a surfer off Cocoa Beach aired on ABC's Good Morning America where Champion is a meteorologist.  During that segment, Champion took the opportunity to tell the national audience about the importance of properly discarding fishing line.  Champion's remarks brought accolades on the Sea Turtle Preservation Society's Facebook page.


Joining Sea Rescue with Sam Champion is a new series, The Wildlife Docs, which also airs this weekend on ABC stations across the country during Litton’s Weekend Adventure block.


The Wildlife Docs takes viewers behind the scenes with an elite team of veterinarians, technicians and trainers as they care for the more than 12,000 exotic animals that live in Busch Gardens® Tampa, the sister park to SeaWorld®.

Much of the show will take place in the park’s new Animal Care Center, an innovative, 16,000-square-foot medical center that brings park guests into the animal care experience. The Animal Care Center includes a nutrition center, treatment rooms, clinical lab and viewing areas.

In the series premiere viewers will be treated to something rare:  three Malayan tiger cubs are born. Their arrival is an encouraging sign of progress in an effort to start a new bloodline for this critically endangered species. The excitement is short-lived however, when it is discovered one of the cubs has a potentially life-threatening condition.