According to the U.S. Centers for Disease Control, flu activity in the United States continues to increase for the week ending December 28, 2013 (week 52). Twenty-five states are now reporting widespread levels of activity.  Additional increases across the country are expected by the CDC in the coming weeks.  Influenza A 2009 H1N1 (also known as the Swine Flu) was the most commonly detected influenza subtype nationwide. 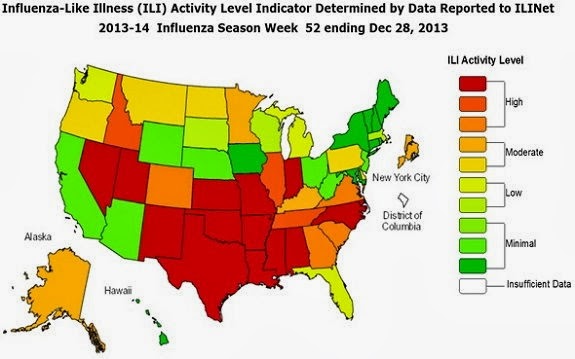 Flu Activity Across Florida
Currently, influenza and influenza-like illness activity is increasing in all regions of Florida, which the CDC says is normal for this time of year.  Influenza A was the most common flu type in Florida this flu season.  Of the tests that have been influenza positive, most have been positive for influenza 2009 H1N1, according to the Florida Department of Health.

Because of moderate influenza activity in some regions of the state, the Florida Department of Health is reporting regional influenza activity to the CDC for week 52.  The classification of an activity level refers to the geographic spread of influenza, not its severity or intensity.


SOURCE and Infographs: CDC and FDOH