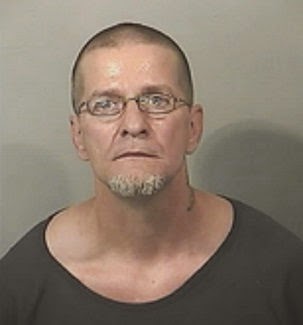 Foster will be held in the Indian River County jail pending his extradition to Brevard County.  He is charged with Armed Robbery and Grand Theft.  His bond has been set at $250,000.

BAREFOOT BAY, Florida - Just before noon on Friday, May 2, 2015, the Brevard County Sheriff's Office responded to a call of a bank robbery at the First United Bank in Barefoot Bay.  According to BCSO, the suspect walked into the bank and passed the teller a note in which he implied a weapon and demanded cash. After receiving an undisclosed amount of money, the suspect then fled the bank on foot.

The suspect is described as a white male in his mid-fifties wearing a burgundy-colored Polo shirt over a white long-sleeve shirt, khaki pants and a ball cap.  He left the bank in an unknown direction.

Shortly after arriving at the scene, a BCSO K-9 Unit conducted a track that lead to a nearby vacant residence.  Deputies then discovered a disturbed screen and window at this residence and discovered a burgundy polo shirt that was identified as part of the suspect’s apparel.

Deputies who patrol the Barefoot Bay area viewed the bank surveillance film and were able to identify the suspect from previous encounters.  That identification has also been corroborated by four civilian acquaintances of the suspect and a bank teller.  An Arrest Warrant has been obtained for Dennis Leo Foster with last known address of 911 Hyacinth Circle in Micco.

He is described as a white male, fifty years-of-age, 5’6” tall, weighing 190 pounds. Foster has brown hair and hazel eyes.

Investigators believe that Foster may be hiding within the Barefoot Bay area and an active search is underway.

Anyone with information about this investigation is asked to call Agent Jack Hanigan of the Brevard County Sheriff’s Office South Precinct General Crimes Unit at 321-253-6683 or CRIMELINE at 1-800-423-TIPS (8477).