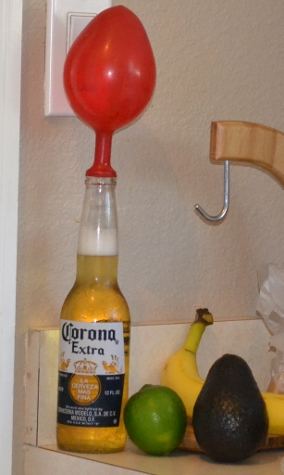 If you are looking for a new Cinco de Mayo 2014 beer game, try this one.  It is called 'Drink a shot or eat hot'.  The rules of the game are this. Each player places a balloon on top of their Mexican beer, like Corona Light.   The players then shake their beer to cause the balloon to inflate.

If the players' balloon looks like an avocado, they have to eat something hot and wash it down with their beer.

If the players' balloon inflates more and looks like a lime, they have to drink a shot and chase it down with a beer.

Because the inflation of the balloon is controlled by the carbon dioxide in the beer, the participants have a hard time cheating.

Another fun fact about this Cinco de Mayo 2014 beer game is that carbon dioxide is nearly as heavy as water.  So if the balloon is inflated with just one breath on top of the CO2 in the balloon, the balloon will fall as it is thrown around much to the opposite expectation of the person trying to catch the balloon.

Don't worry about the beer becoming flat, it only adds a slight flatness to Corona Light.  Also, since the players are chasing down a shot or something hot like tobacco sauce on a nacho, they really won't care anyhow.

Cinco de Mayo: When is an Avocado Ripe?