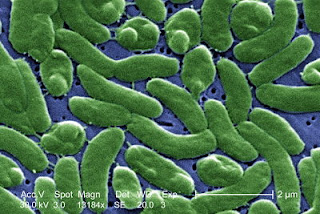 Health officials are warning of a flesh-eating bacteria, Vibrio vulnificus, that is present in Florida waters.

The Florida Department of Health is urging Floridians with certain health conditions to avoid eating raw oysters and exposing open wounds to seawater and estuarine water, including the Indian River Lagoon, which may harbor bacteria called Vibrio vulnificus. Occurring naturally in the warm coastal waters, particularly during the summer months, Vibrio vulnificus has the potential to cause serious illness.

Persons who have wounds, cuts or scratches and wade in estuarine areas or seawater where the bacteria might be present can become ill. Symptoms of Vibrio vulnificus in wound infections typically include swelling, pain and redness at the wound site.

Other symptoms of Vibrio vulnificus infection include; nausea, vomiting, abdominal pain, diarrhea, fever, chills, and the formation of blistering skin lesions. Individuals experiencing these symptoms should contact a physician immediately for diagnosis and treatment.A recent study showed that people with these pre-existing medical conditions were 80 times more likely to develop Vibrio vulnificus bloodstream infections than healthy people. Individuals with liver disease, including Hepatitis C and cirrhosis, are most at risk for developing serious illness from Vibrio vulnificus obtained from eating raw oysters. Others who should avoid consuming raw shellfish are those with hemochromatosis (iron overload), diabetes, cancer, stomach disorders or any illness or treatment that weakens the immune system. Thoroughly cooking oysters, either by frying, stewing, or roasting eliminates harmful bacteria and viruses in the meat. Consuming raw oysters that have undergone a post-harvest treatment process to eliminate the bacteria can also reduce the risk of illness.

A total of 8 cases of Vibrio vulnificus were reported so far in 2015 that resulted in two deaths.

Do not eat raw oysters or other raw shellfish.

Avoid exposure of open wounds or broken skin to warm salt or brackish water, or to raw shellfish harvested from such waters.