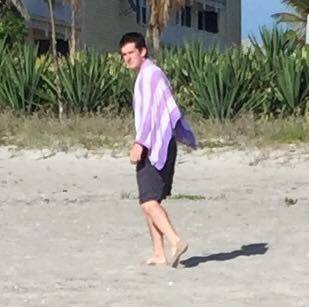 INDIALANTIC, Florida - The Indialantic Police Department is seeking the public’s help in identifying a man who allegedly exposed himself to a woman on a Brevard County beach.

Police say that the man pictured in the above photograph approached a woman and her young child on the beach in the area of US 192 and State Road A1A (Wavecrest Avenue) on Saturday, July 18, 2015, at approximately 9 a.m. The man then allegedly exposed himself and conducted lewd activities in front of the woman.

The suspect is described as a white male who appears to be in his early twenties with short brown hair that just touches his ears. The man was wearing dark grey shorts with no shirt, and had a towel around his shoulders. Police say that the man fled north from the beach when he observed the woman taking photographs of him.

Police ask that if you can identify the subject, please contact Sergeant Michael Connor or Detective Timothy Weber with Indialantic Police Department at 321-723-7788.
Labels: crime Indialantic