LISTEN TO A DISCUSSION OF THIS TOPIC ON BILL MICK LIVE 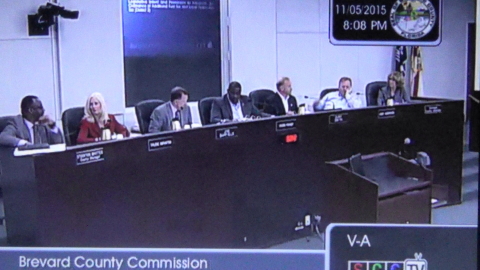 "I am not comfortable passing this tonight," Commissioner Curt Smith said before he made the motion to postpone the vote. " ... We must all contribute to the solution, there can be no sacred cows." Smith suggested that the Board hold more workshops before voting on the issue.

"If we do what you are talking about, what I would like to see added is a time and date when we come down to make a decision," Barfield said of Smith's motion. "Because what has happened in the past is that it is easier to put off, put off and put off."

Smith agreed that the Board make a final decision on February 1st, 2016, since the imposition of the tax would not occur until at least January 2017.

"Ya'll want to workshop it, we can work shop it," said Commission Chair Robin Fisher. "I can tell you that your not gonna learn anything in a workshop that you haven't learned already. You got a revenue problem. You don't get the same amount of revenue surrounding cities get. Volusia, Osceola, Orange, Indian River, and surrounding counties, they have other taxes. Things that are available to them. They have a public service tax - you don't have it in this county. They don't have limitation on their charter. They have extra sales tax. They have extra local gas tax..."

"... So we can keep sitting here and we can play around," Fisher complained. "I've been at this game long enough. It's been my seventh budget cycle. I've seen exactly what I see today. We're going to kick it down the road. We're going to try to make a decision in a few more workshops. I hope we do - if that's where the Board wants to go. But at the end of the day. I'm tellin ya. Unless your gonna start addressing additional revenue, we're wasting each others' time."

"The quality of life in this community is too important to mess around because we got 200 people that sent emails to us - out of 500,000 - and saying, 'You know what? I don't want my gas tax to go to 6%.' Surrounding counties are paying it, and we have a revenue issue..."

"...Work-shopping it - is great," Fisher said sarcastically. "I'm a team player. We can sit there and talk around it. You got to tell the people the truth. And I'm tellin ya, you've got a revenue issue and you've got to raise your taxes, and you got to raise the revenue, and let's stop screwing around with it and either bite the bullet or wait until I get out of office and do it. I don't need it. I mean, shit."

"... You bring the two hundred shirts out," Fisher said to the audience. "That's what happened in this environment. And now everybody is scared. Let's go. You know, you are going to try to call Commissioner Smith out. Commissioner Smith is a darn good Commissioner.  He's smarter today than he was the day he ran for office. And he has more facts today than he had the day he ran for office. And that's the problem when you get in this office. People try to live up to campaign promises and don't even know what campaign promises they should be making."

"...You keep getting upset," Commissioner Trudie Infantini said to Fisher. "As long as we spend money in District 1, District 1 is a happy camper. But I will tell you what. We don't want to keep spending all of our money in District 1, and then go back to you guys, the taxpayers, and say, 'Pay up a little bit more because we ran out of money because we gave so many cash up-front bonuses in the North Brevard Economic Zone. It has got to stop."