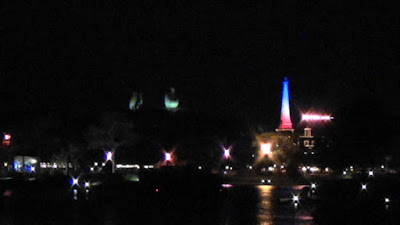 ORLANDO, Florida - The Eiffel Tower replica located at the France Pavilion in EPCOT's World Showcase at Walt Disney World in Florida was lit Saturday night in the French national colors of blue, white and red to honor the victims of Friday's terrorists attacks in Paris, France.

While EPCOT's replica was bathed in the Tricolors of France, the actual Eiffel Tower in Paris went dark Saturday night in the French capital, which is also known at the "City of Light," to mourn the 129 victims killed in four separate attacks on Friday.

EPCOT's Eiffel Tower replica was one of several locations throughout the Orlando, Florida area that was lit in both solidarity and mourning for the French people following the Paris attacks. The Orlando Eye located in the tourist district along International Drive was also aglow in blue, white, and red, as was the Amway Center. The Tricolors of France stand for blue: freedom (liberté), white: equality (égalité), and red: brotherhood (fraternité).

"We stand prepared and ready to provide whatever assistance that the government and the people of France need to respond," said U.S. President Barack Obama on Friday. "France is our oldest ally. The French people have stood shoulder to shoulder with the United States time and again. And we want to be very clear that we stand together with them in the fight against terrorism and extremism."


"Paris itself represents the timeless values of human progress," continued President Obama. "Those who think that they can terrorize the people of France or the values that they stand for are wrong. The American people draw strength from the French people’s commitment to life, liberty, the pursuit of happiness. We are reminded in this time of tragedy that the bonds of liberté and égalité and fraternité are not only values that the French people care so deeply about, but they are values that we share. And those values are going to endure far beyond any act of terrorism or the hateful vision of those who perpetrated the crimes this evening."