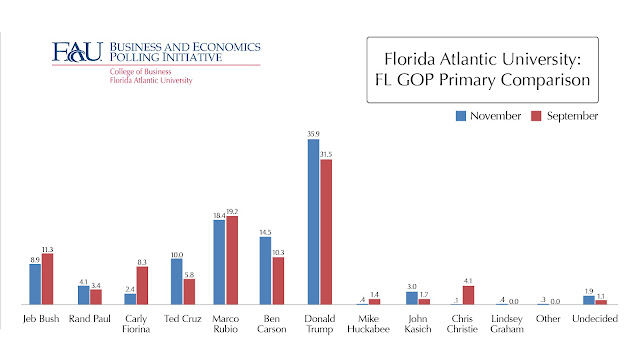 Donald Trump has doubled the vote of his nearest Republican Presidential Primary challenger in the winner-take-all delegate state of Florida, according to a new poll by the Florida Atlantic University Business and Economics Polling Initiative (FAU BEPI) released on Wednesday.

Trump leads the GOP field in the Sunshine State with 36%, followed by Marco Rubio at 18%, Ben Carson at 15% and Ted Cruz at 10%. Former Florida Govenor Jeb Bush placed fifth with only 8.9%, down more than two points from BEPI’s poll in September when he garnered 11.3% of the vote in Florida.

“Despite conjecture that Donald Trump has plateaued, his support in Florida remains very strong and could be growing,” said Kevin Wagner, Ph.D., associate professor of political science at FAU and a research fellow of the Initiative.

The GOP primary fight has not had a positive impact on favorability ratings for many of the candidates. Trump has a favorable rating of just 41% among all Florida voters, while 51% have an unfavorable impression of him. His numbers are more positive among likely GOP voters, however, with 63% favorable compared to 32% unfavorable.

But those low favorability ratings still do not help Hillary Clinton among Floridians in head-to-head matchups with the GOP frontrunners. Carson commands the biggest margin over Clinton at 9.7 points (50.2% to 40.5%) while Trump leads the former First Lady by 8.7 points in Florida (49.2% to 40.5%).