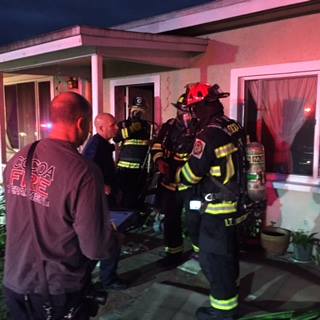 At approximately 6 a.m., Cocoa fire rescue crews responded to the 1500 block of Cambridge Drive in Cocoa, Florida for a reported house fire. When firefighters arrived within four minutes of the call, they reported observing smoke coming from the windows and front door of the single family home.

Six adults were awakened by a smoke alarm and had safely evacuated the house before firefighters had arrived. In less than 10 minutes, fire rescue crews stopped the fire from becoming an inferno and consuming the rest of the structure.

The fire was contained to the kitchen area over the stove which is believed to be the combustion's point of origin. The damage caused by the fire is estimated at approximately $15,000.

The Space Coast Chapter of the American Red Cross is assisting the family that was temporarily displaced as a result of the fire.

“The family is fortunate there were working smoke alarms in the home,” said City of Cocoa Fire Chief Gene Prince. “This is another example of how working smoke alarms save lives. We want to encourage our residents to check the batteries in their smoke alarms and make sure they are working. If they need assistance they can always contact us.”