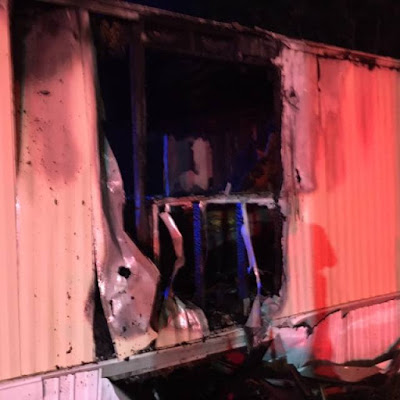 COCOA, Florida - A Brevard County man is facing murder and arson charges after he allegedly set his father's mobile home on fire, killing him.

Just before 4:30 a.m. on Thursday, emergency dispatchers received a 9-1-1 call from a woman reporting that there was a fire with a man, later identified as 67-year-old Stanley Maicus, still inside the structure located in the 1700 block of Nomad Street in the Sunrise Village mobile home community.

Brevard County and City of Cocoa Fire Rescue crews entered the burning trailer and pulled the father out. He was then transported to the hospital where he was pronounced deceased.

Cocoa Police say that 35-year-old Isaac Maicus, of Cocoa, Florida, was at the scene when the fire erupted inside his father's trailer and that he later made admissions to police detectives about starting the fire.

“He admitted to setting the fire,” said Detective Ben Erskine. “He knew his father was inside the trailer at the time and he made no attempt to get him out.”

Police say that the motive for the patricide is unclear. However, police noted that there was a prior incident of violence between the father and son.

The Brevard County Medical Examiner's Office will conduct an autopsy to confirm cause and manner of death.