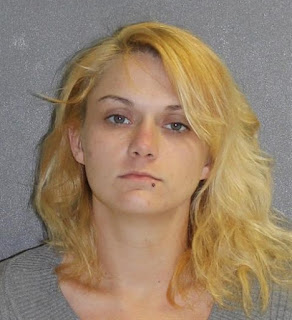 DELTONA, Florida - When a 72-year-old Deltona woman awoke Sunday morning to find a strange woman wearing her husband’s clothes in their guest bedroom, she immediately assumed the worst. As it turned out, infidelity wasn’t the explanation. The intruder also wasn’t sleepwalking, as she had allegedly claimed. She was hiding from Volusia County Sheriff’s deputies who had been searching for 22-year-old Eryn Rice ever since she broke free earlier on Sunday morning while being handcuffed for shoplifting.

According to the Volusia County Sheriff's Office, the Florida woman entered the elderly couple's house, washed her clothes in the washing machine, took a shower, slipped into some flannel pajamas belonging to the woman’s 72-year-old husband, and then napped in the guest bedroom.

Deputies say that shortly before 6:30 a.m. on Sunday, a woman was allegedly seen shoplifting several hundred dollars worth of cosmetics from a CVS Pharmacy on Howland Boulevard in Deltona, Florida. Before she exited the store, however, her alleged accomplice realized deputies spotted him in his car and so he drove off.

Meanwhile, a deputy nabbed Rice as she left the CVS store and took her into custody. As the deputy got one handcuff on Rice’s left wrist, she allegedly became combative and spun around, violently shoved the deputy to the ground, and then took off running. Despite sustaining abrasions to her forearm, elbow and both knees, the deputy managed to give chase. However, the Rice got away and eluded capture during the ensuing search which also included K-9 units and a helicopter. Deputies were able to identify the suspected driver of the vehicle, 25-year-old  John Willey, and went to his house on Fountain Road - but Rice wasn’t there.

Shortly before 11:30 a.m., deputies were flagged down by a 72-year-old couple who asked if they were looking for a woman. The couple then proceeded to explain that after the husband left to play golf that morning, the wife found a strange woman in the house and she was wearing her husband’s clothes. So the wife called her husband and demanded an explanation. When he came home, the husband insisted that he wasn’t having an affair with the intruder and had never seen her before. So the couple agreed to drive her less than a mile away to a residence on Fountain Road. Later, they would find the woman’s sock and panties in their washing machine.

When deputies returned to the residence on Fountain Road and took up tactical positions, it wasn’t long before they spotted Willey driving off. Deputies say that Willey was trying to conceal Rice, who was hiding on the floorboard of the vehicle. Both were immediately taken into custody.

Rice now faces a long list of criminal charges which include: retail theft, resisting an officer with violence, battery on a law enforcement officer, giving a false name, escape, burglary, violation of probation, and petty theft.

Willey was charged with being an accessory after-the-fact to robbery and harboring an escaped prisoner. Deputies say that, after retracing Rice’s footsteps at DuPont Lakes Park, they found the discarded handcuffs that she managed to slip out of.  Deputies also found two syringes on Rice and another in the car that allegedly contained methamphetamine residue.
Labels: Florida Florida Man Florida Woman FloridaMan Volusia