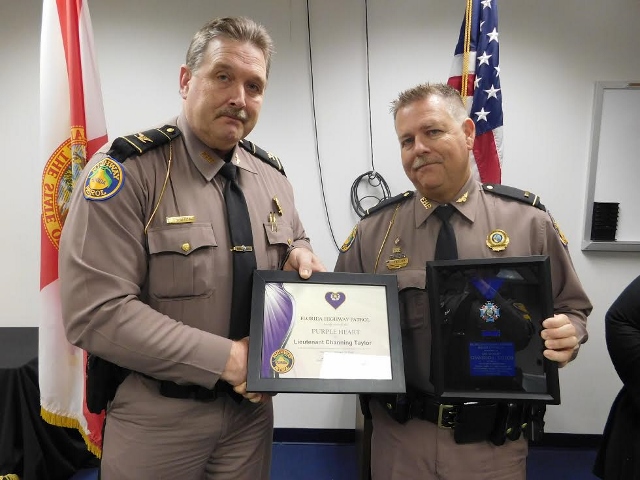 BREVARD COUNTY, FLORIDA -  Florida Highway Patrol Lieutenant Channing Taylor was recognized for his heroism during a shooting incident that occurred on June 14, 2015 in Brevard County, Florida.

Lt. Taylor was awarded the Medal of Valor and the The Medal of Valor - the highest award bestowed by the Florida Highway Patrol based on a member’s display of outstanding bravery, gallantry or courage when faced with great personal danger.

The Purple Heart is presented to a member who has been injured or wounded by acts of aggression while performing the duties of a law enforcement officer.

“Lt. Taylor is to be commended for his actions. He not only ended a life threatening situation to himself, but saved the lives of individuals around him,” said Colonel Gene Spaulding, director of the Florida Highway Patrol. “Lt. Taylor demonstrated his commitment to the Florida Highway Patrol and the residents and visitors of the great state of Florida by his actions that day.”

On June 14, 2015 at approximately 9:15 p.m., Taylor observed a red pickup truck entering the parking lot of the Pilot Gas Station on State Road 520 in Brevard County without headlights on. Lieutenant Taylor then conducted a traffic stop. After the initial contact with the female driver of the truck, 16-year-old Morgan McNeil, the teen passenger of the vehicle produced a revolver and fired at Taylor, striking Taylor in the shoulder. Taylor found cover and with a clear line of sight, engaged 15-year-old Zane Terryn with his service weapon, fatally wounding Terryn.

McNeil was taken into custody immediately after the incident. It was later learned that Terryn and McNeil had a suicide pact.