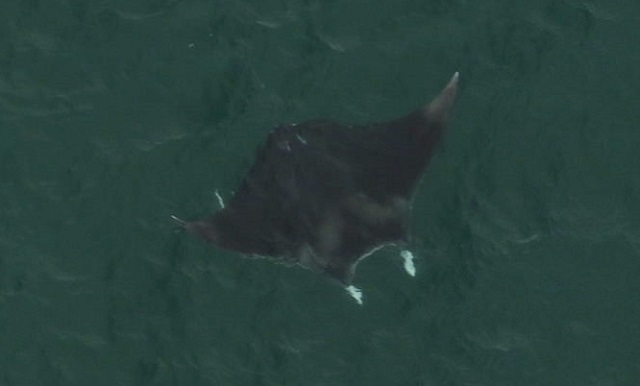 BREVARD COUNTY, Florida - A Giant Manta Ray was photographed near the surface of the water by the Florida Fish and Wildlife Commission during the annual right whale winter migration survey off of Florida's Space Coast.

The manta ray was spotted in the Atlantic Ocean approximately sixteen nautical miles off of the Canaveral National Seashore on Tuseday, January 26, 2016.

Giant Manta Rays are slow-growing zooplankton filter feeders that reach maturity around age 10. They can have a wingspan of up to 29.5 feet with an average around 22 feet and weigh as much as 4,000 pounds. Mantas give birth to only one pup every two to three years. Like all rays, Giant Manta Rays are related to sharks and, like sharks, have skeletons made out of cartilage rather than bone.

Manta rays are caught throughout their global warm water range in the Atlantic, Pacific, and Indian Oceans. The mantas' gill plates are highly valued in international trade for use in traditional medicine and can retail for as much as $680 per kilogram in China, according to NOAA's National Marine Fisheries Service.

Manta rays are not listed under the Endangered Species Act by the U.S. federal government but are protected in Florida state waters.