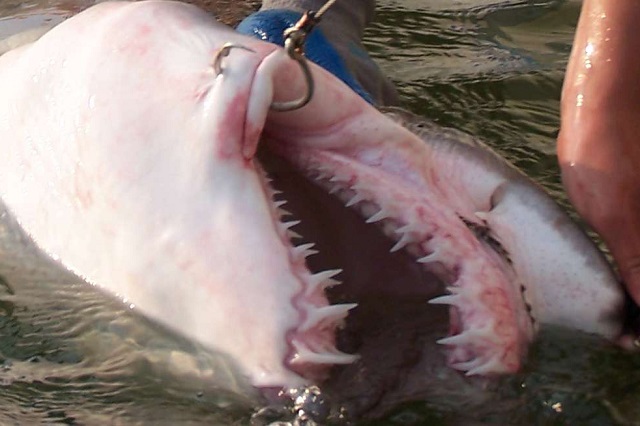 A new insight into how sharks regenerate their teeth, which may pave the way for the development of therapies to help humans with tooth loss, has been discovered by scientists at the University of Sheffield in England.


The study identified a network of genes that enables sharks to develop and regenerate their teeth throughout their lifetime. The genes also allow sharks to replace rows of their teeth using a conveyor belt-like system.

Scientists have known for some time that sharks and rays develop rows of highly specialized teeth with the capacity for lifelong regeneration. However, the genetic mechanisms which enable this to happen were poorly understood.

Now a research team, led by Dr. Gareth Fraser from the University of Sheffield's Department of Animal and Plant Sciences, has identified how a special set of epithelial cells form, called the dental lamina, which are responsible for the lifelong continuation of tooth development and regeneration in sharks.

Through analyzing the teeth of cat-shark embryos, the researchers characterized the expression of genes during stages of early shark tooth formation. They found that these genes participate in the initial emergence of shark's teeth and are re-deployed for further tooth regeneration.

Researchers also discovered that the tooth-making genes found in sharks are conserved through 450 million years of evolution, and probably made the first vertebrate teeth. These tooth-making genes, therefore, make all vertebrate teeth from sharks to mammals. However, in mammals like humans, the tooth regeneration ability that utilizes these genes has been highly reduced over time.

Humans still possess these tooth-making cells, which facilitates the production of replacement teeth, but only two sets are formed - baby and adult teeth - before these specialized cells is lost.