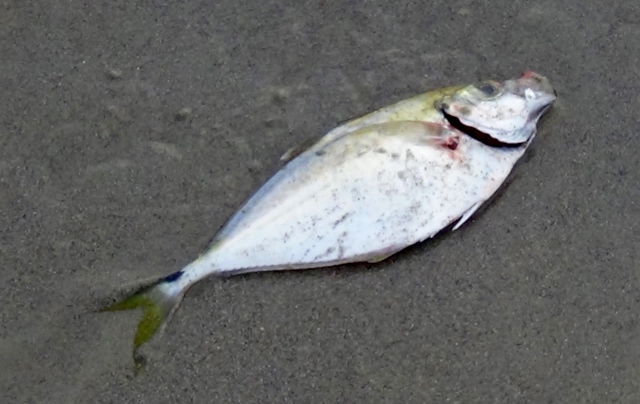 COCOA BEACH, Florida - Although westerly winds have rid the beaches of stinging jellyfish over the last 48 hours, hundreds of dead fish are washing up along the beaches of Cape Canaveral and Cocoa Beach on Tuesday, March 15, 2016.

The fish kill is limited to just one species - the Atlantic Bumper which are members of the Jack family and known locally as Hornbellies, according to outdoor sports writer Ted Lund.

This is the second fish kill that Brevard County beachgoers have seen within the last 3 months after several cargo containers fell overboard from a barge that departed from Port Canaveral in early December. However, there has not been an official connection made between the Port Canaveral shipping accident and the recent fish kills.

"We can expect more of this sort of thing as cargo spills become a regular part of lives thanks to the aggressive industrialization plans underway at Port Canaveral," Lund said.

"We still don't know what went overboard, how much of it or where. This very well could be a time-release type situation where packaging or containers are breaking down overtime. The way thread herring or Atlantic bumper behave, it's very likely they would see a submerged container as structure to congregate around, then they could fall victim en masse to any sort of chemical leak."

"Additionally, there have been hundreds or sick, dying or dead pelicans, gannets and shearwaters as well as an inordinate number of dead sea turtles."