BREVARD COUNTY, Florida - In an effort to keep Floridians informed of the state’s efforts to conserve fish and wildlife resources and protect the environment and economies of the communities on and around the Indian River Lagoon, the Florida Fish and Wildlife Conservation Commission (FWC) will issue an Indian River Lagoon status update each weekday. These updates will help residents stay informed of the conditions in the lagoon, as well as the latest actions by the State of Florida.

On March 29th agency leadership from FWC, Department of Environmental Protection (DEP), St. Johns River Water Management District (SJRWMD) and Department of Health (DOH) toured the Banana River near Cocoa Beach down to Patrick Air Force Base. They were joined by Speaker Steve Crisafulli and Senator Thad Altman. In addition, they met with Brigadier General Wayne R. Monteith and other partners at the base.

They observed the brown tide event and discussed current status with experts and health officials as well as witnessed local, county, FWC and DEP crews assisting with cleanup led by Brevard County related to fish mortality.

Aerial view of fish mortality appears to be on the decline with no additional mortality at this time, according to FWC.

FWC is taking weekly water samples from 8-10 sites in the Indian River Lagoon and found that the highest concentrations of brown tide were observed in samples taken on 3/16 from Riverdale Drive and from 3/25 at the Saint John Boat ramp in the northern Indian River Lagoon.

In addition to on-the-ground response and monitoring efforts, state and local agencies are also focusing on longer-term water quality restoration efforts for the Indian River Lagoon. These restoration projects and management strategies are essential to reducing nitrogen and phosphorous levels, which will help to decrease the intensity and duration of algal bloom events. 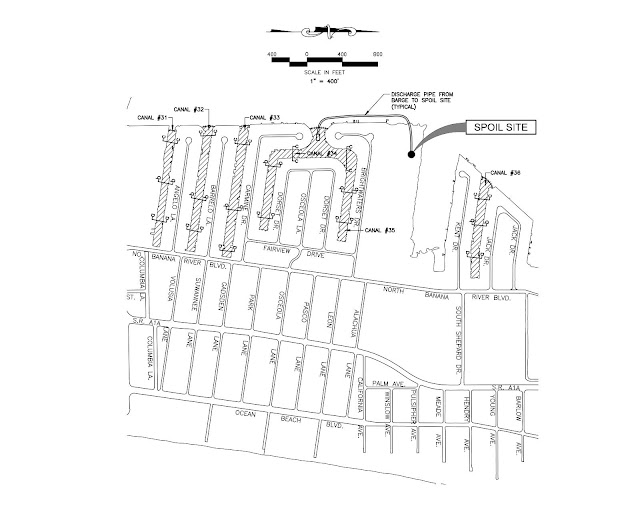 The Residential Dredging and Muck Removal-Phase 1 Project is a joint project between Brevard County and the City of Cocoa Beach that is currently underway. The deposits of what has been termed "Muck" have been identified as an environmental blight on the Indian River ecosystem. Florida Department of Environmental Protection (FDEP) had made available to Brevard County $10,0000 for FY 2015 to removal this muck. The County was aware of Cocoa Beach's active dredge and waterways maintenance program and offered to partner with the City to dredge and remove the muck from the six residential canals North of State Road 520. The County is providing $2,000,000 of the FDEP monies towards this project.
Labels: Cocoa Beach Fishing Indian River Lagoon Ocean