BREVARD COUNTY, Fla. – The Brevard County Commission unanimously approved an agreement with the Florida Department of Environmental Protection (DEP) on Tuesday for an additional $800,000 in state funding for a project to remove aquatic weeds from ponds, install water monitoring sensors, and map muck contaminants in the Indian River Lagoon.

This latest appropriation from the State of Florida builds on the previous $20 million awarded in the past two years for the Brevard County Muck Dredging Project, making a total investment of $20.8 million to date.

"Brevard County appreciates state assistance with projects to restore health to the Indian River Lagoon - a local, state and national treasure. Inadequate protections in the past have led to harmful muck accumulation," said Brevard County Natural Resources Management Director Virginia Barker. "We are proud to be a partner in this important project."

As part of the project, the County will receive $450,000 to remove aquatic weeds from ponds that ultimately drain into the Indian River Lagoon. The remaining $350,000 will go to water monitoring and muck testing.

"Removing aquatic weeds upstream of the lagoon will help to restore healthy water quality in the lagoon downstream," Barker said. "The plants absorb nutrients.  If we remove them, we remove nutrients and organic debris that otherwise contributes to algae blooms and muck accumulation."

Although the 2011 Superbloom, 2012 brown algal bloom, and 2016 brown algal bloom all started north of State Road 528 near Kennedy Space Center, the County will sample muck several miles to the south within seagrass segments at two sites located near south Merritt Island and west of Indialantic.

Barker stated in an email to Brevard Times that the "[testing] areas supported brown tide blooms even though the blooms did not start there." Barker also noted that the recent fish kill area included the Merritt Island testing site.

"These areas were designated 2 years ago when we requested the funds from the Legislature," Barker explained. "They were selected based on prior state modeling that identified these areas as needing the highest percentage load reduction for the North [Indian River] and Banana [River] BMAP [Basin Management Action Plan] areas, respectively." 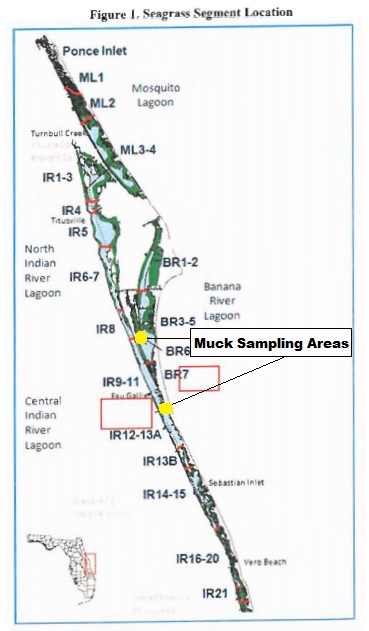 The muck samples will be tested for toxicity by students and citizen scientists as part of an educational/outreach component. After the testing is complete, color maps will be created to indicate levels of each contaminant. According to documents filed with the County, the maps will then be "distributed to inform decision makers in all agencies involved in prioritizing and funding lagoon restoration actions."

Muck build-up consists of nutrient pollution, sediment, vegetation, and other organic matter entering the Indian River Lagoon over time and accumulating at the bottom. As muck decomposes, it consumes oxygen needed by fish and releases nutrients that feed algae blooms.

The state funding will also provide for the installation of Kilroy monitoring stations at two locations in the Indian River Lagoon to examine the exchange of nitrogen and phosphate pollutant loading between major sub-basins. The final station locations will be coordinated between the County and the St. John's River Water Management District.

An array of water flow meters will also be installed adjacent to each Kilroy to estimate the total pollution transport between sub-basins of the lagoon using actual flow and concentrations measured at each Kilroy station.

The Kilroys will provide live data that will be accessible to the public on the internet.
Labels: Indian River Lagoon Ocean