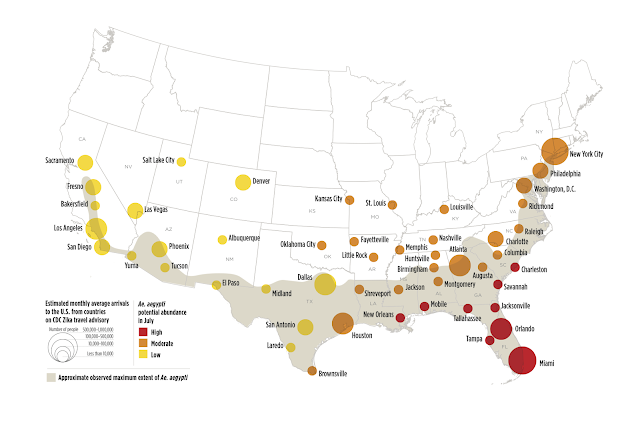 MIAMI, Florida - Florida Governor Rick Scott announced on Friday that the Florida Department of Health (DOH) has concluded that four cases of the Zika virus are likely mosquito-borne in  Miami-Dade and Broward Counties. And a Zika Risk Map created by NASA predicted that such a mosquito-borne transmission of the Zika Virus in the United States would most likely occur in the Miami area during the month of July 2016.

“We learned today that four people in our state likely have the Zika virus as a result of a mosquito bite," Governor Scott said.  "All four of these people live in Miami-Dade and Broward Counties and the Florida Department of Health believes that active transmissions of this virus could be occurring in one small area in Miami.  While no mosquitoes have tested positive for the Zika virus, DOH is aggressively testing people in this area to ensure there are no other cases."

So far, the Florida Department of Health believes that active transmissions of the Zika virus are occurring in one small area in Miami-Dade County, just north of downtown.   The cases are likely the first known occurrence of local mosquito-borne Zika virus transmission in the continental United States.

“All the evidence we have seen indicates that this is mosquito-borne transmission that occurred several weeks ago in several blocks in Miami,” said Tom Frieden, M.D., M.P.H., director of the U.S. Center for Disease Control.

NASA's scientific model published in April predicted that the Zika virus pandemic that has afflicted much of Latin America and the Caribbean was most likely to gain a foothold in the continental U.S. through South Florida during this summer.

NASA scientists examined three key factors - mosquito abundance in the U.S., international travel to Zika infested regions, and socioeconomic status - that contribute to the spread of Zika virus to understand where and when a potential outbreak may occur.

The Zika virus is spread by bites from two mosquito species: Aedes aegypti (primarily) and Aedes albopictus, both found in Florida.

The study found that Florida cities have the heaviest amount of travelers arriving from countries where the Zika virus has become pandemic in combination with the longest mosquito season in the United States. Those two main factors have made the Sunshine State ground zero for a local transmission outbreak of the Zika virus.

Miami-Dade County and Broward County were the most likely areas to have the first local transmission of the Zika Virus in the continental U.S. The next most likely area is Orlando, Florida, according to the Zika Risk Map.

According to the CDC, babies born with the Zika virus transmitted from their mothers who contracted the disease while pregnant have developed microcephaly - a disease which causes the babies' brains and heads to shrink.  The first baby born with microcephaly in Florida was reported in June. Women who are pregnant or could become pregnant should avoid travel to Zika-affected areas, including Florida.

“We have been working with state and local governments to prepare for the likelihood of local mosquito-borne Zika virus transmission in the continental United States and Hawaii,” said Lyle Petersen, M.D., M.P.H., incident manager for CDC’s Zika virus response. “We anticipate that there may be additional cases of ‘homegrown’ Zika in the coming weeks.  Our top priority is to protect pregnant women from the potentially devastating harm caused by Zika.”

Despite the known risks to pregnant mothers and their babies in the United States, President Obama and Congress have not enacted any travel restrictions to and from countries with Zika outbreaks.