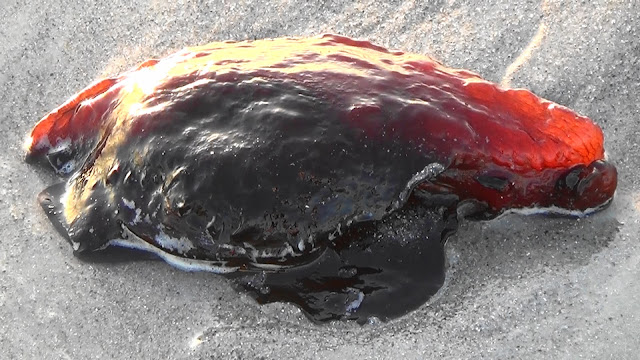 Sea hares, also known as sea slugs, are gastropods just like slugs found on land. Instead of an external shell, sea hares have an internal shell made of protein.  Since they do not have a shell, sea hares have developed unique defenses from predators such as natural camouflage which allows them to blend in with their surroundings and avoid visual detection.

Their color depends on their diet, according to the Florida Fish and Wildlife Commission. For example, sea hares that eat mostly red algae tend to have a reddish color like the one pictured above. Sea hares also help keep the ocean and estuaries, like the Indian River Lagoon, clean by feeding on algae and cyanobacteria.

A few sea hare species are even capable of releasing a toxic ink, similar to that of an octopus, that acts as visual and scent deterrent, allowing them to escape. Sea hares also have a similar toxin in their skin that makes them inedible to some predators.

Sea hares are hermaphroditic, which means they possess female and male reproductive organs. Shortly after mating, they lay their eggs in a ruffled, ribbonlike strand or in a cluster.

Most sea hares typically live up to one year and are among the largest gastropods in the world. The largest sea hare species can reach a length of 30 inches and weigh up to 4 pounds. The one pictured above was approximately 8 inches in length.