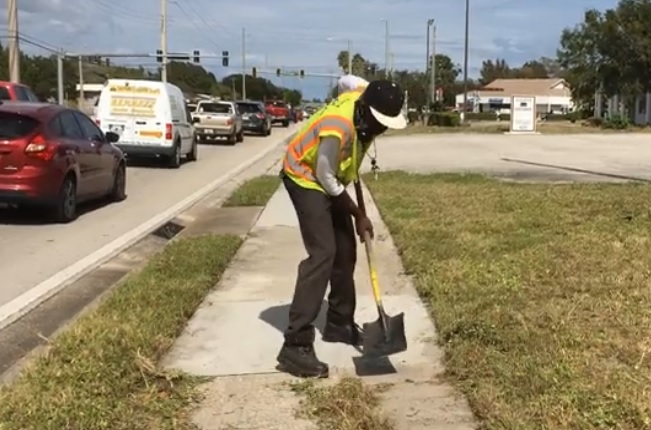 COCOA, Florida - A restructured contract for the city of Cocoa’s landscaping services is now being
used to help convicted felons rehabilitate and reenter society as productive, contributing individuals.

The City has partnered with Alternative Behavioral Services (ABS) managed by the Celebration Tabernacle Church in Cocoa to maintain City landscapes using the labor resources of convicted felons reentering society.  The program, which began in February 2016, has so far helped nearly two dozen felony offenders successfully transition from prison back into the community.

Pastor Errol Beckford of Celebration Tabernacle Church calls it a powerful crime reduction program.  “One of the reasons men commit crime is lack of opportunity; lack of jobs,” Beckford said.  “The reentry program provides that.  It provides that without discriminating against what they do or what they did, they have a chance to come back and to give back to society in a practical way and get paid for it.”

The idea originates back to the 2014 Crime Awareness and Prevention Summit held by Cocoa Mayor, Henry Parrish III.  Members of the community and distinguished panel members discussed the impact prior offenders were having on the Cocoa community and the lack of opportunity to re-enter society.  The discussion was continued at the community-based committee level during the development of the City’s five-year strategic plan.  Born out of this process was a program that would support prior offender’s basic needs to ensure a continued life of crime would not continue.

In addition to meaningful work and a purpose in community the offenders are also required to obtain their GED, attend financial literacy classes and attend church.

Among the success stories is Tommy Dixon, 54, a convicted felon released from prison in April, 2016 after serving time for felony traffic offenses.  Dixon said he couldn’t find a job anywhere until he heard about ABS.

“It was hard,” Dixon said.  “I kept applying places and they kept saying I was a felon.  They don’t take felons.  But I heard about ABS and they helped me out a lot.  They gave me a chance to prove myself and I did.”  Dixon worked in the program for about six months when he landed a better, higher paying job at a private sector company in Rockledge.  “I’m proof this program works,” he added.  “I feel like I’m on top of the world.  I feel much better, more productive to society now and I just feel great about myself.”

Frank Mirabito is with the City of Cocoa’s Parks and Grounds Division.  Mirabito is tasked with implementing the contract between the city and ABS.  “Instead of contracting with inmates from outside the county, we’re hiring people from within the community to take care of the community,” Mirabito explained.  “This is a good opportunity for them to get some job training and experience to build a resume and to prove to future employers that they can stay out of trouble and not reoffend.  Tommy Dixon is a perfect example of how this program works.”

“We all want the same thing,” Pastor Beckford noted.  “We all want crime to go down because we can’t lock our way out of it.  This is one way crime will go down.”

The City’s contract with ABS was renewed and expanded for this year and is funded through the City’s general revenue fund and dedicates $77,497 for the program.  The funds pay for personnel for jobs that involve maintaining City-owned property and right-of-way locations throughout the city.

The City works with ABS to process applications, place candidates in available positions and provide logistical support for the landscaping operations.

“We hope to see the program expand to include partnerships with additional local governments and continue to see this program feed into our local private sector companies,” said Assistant City Manager Matt Fuhrer.  “It is going to take all of us collectively working together to make significant positive impacts in our community.”