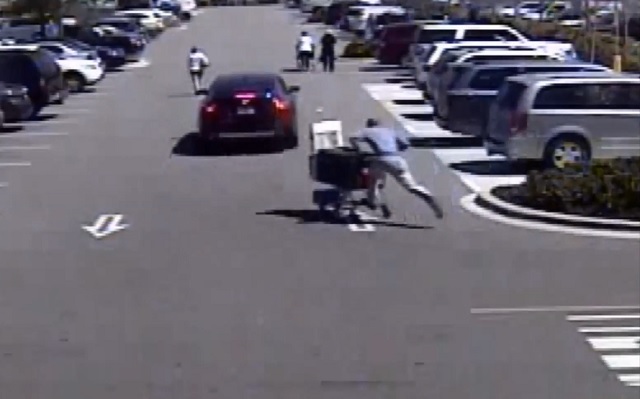 According to the Pinellas County Sheriff's Office, the 40 to 50-year-old Florida man stole approximately $650 worth of merchandise including, a large tote bucket, laundry detergent, snow crab, king crab, smoked salmon, various meats, and a closet organizer.

According to detectives, the Florida man walked into the store, placed the various items in his shopping cart, and then made his way toward the front of the store.

Surveillance video shows the man calmly walking past a closed cashier counter and out the front door of Walmart. Once the man exited the store, he dashed away by skating on the cart to an older model white pickup truck in the parking lot.

The suspect is described as a white male with short brown/gray hair, and he appeared to have a medium complexion. The suspect was wearing a blue long-sleeve shirt with light blue jeans and wearing dark sunglasses on top of his head.

Anyone with information about this case is asked to contact Burglary/Pawn Unit Detective R. Weil at 727-582-6337. To remain anonymous and be eligible for a reward, contact Crime Stoppers at 1-800-873-TIPS or www.crimestoppersofpinellas.org.