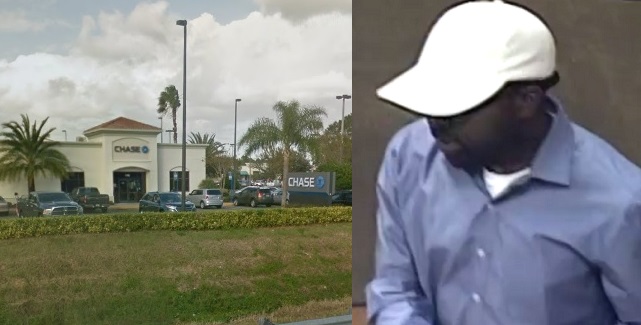 Police say that a man entered the Chase lobby and advised the bank teller that he would like to make a withdrawal. A note was then passed to the teller advising her that he had a gun and that the teller was to give him money in $100’s only. The bank teller complied and an unknown amount of money was given to the suspect.

According to police, the bank robber left the bank without displaying a gun or harming anyone. The robbery suspect is described as a dark skinned black male possibly in his 30’s with goatee facial hair. He was last seen wearing wire framed glasses, a white hat, a blue long sleeve button up shirt, jeans, and white shoes.

If you recognize this suspect,  or have additional information regarding the bank robbery, please contact the West Melbourne Police Department.
Labels: crime West Melbourne