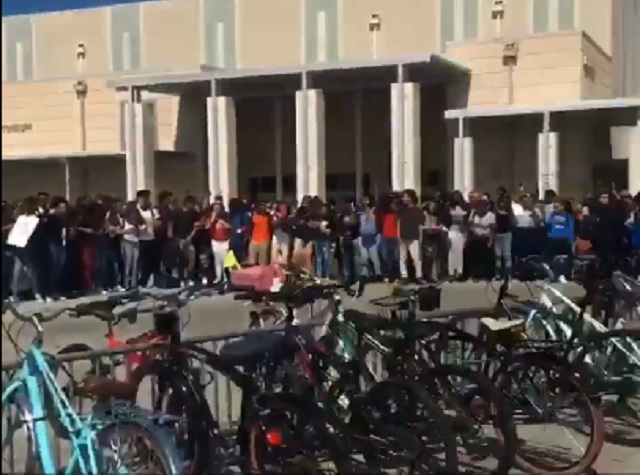 PALM BAY, Florida - Heritage High School students were marked 'tardy' for missing class in order to participate in a gun control protest that took place on Wednesday at the school's campus in Palm Bay, Florida.

The Heritage High School protest lasted for 17 minutes to symbolize the 17 people killed in the Broward County, Florida school shooting.

The students left during lunch period to gather on a plaza in front of the school's administration building in the southeastern corner of the Palm Bay campus where they chanted, "Stop the violence."

"Today as a school we decided to walked out of class for 17 minutes," said one Heritage High student.

"We wanted one thing to be heard. We want the violence to stop and we want change. There is no reason 17 students should be dead. We need need gun control now not tomorrow."

Although the protest took place on campus during school hours, the Brevard Public Schools' administration characterized the gun-control rally as non-disruptive to the other students who did not participate in the walk-out.

"Principals have discretion under our discipline plan to impose a range of discipline that’s appropriate for the situation," said Brevard County Public Schools spokesman Matt Reed.

"The students behaved peacefully without disrupting classes or anyone else’s education. An unexcused tardy seems like an appropriate sanction."